Several Washington Fire Chiefs members were nominated for this recognition, all deserving of recognition with Chief Teran being selected by a committee made up of past recipients, current WFC Board members, and a representative from WFC Staff. 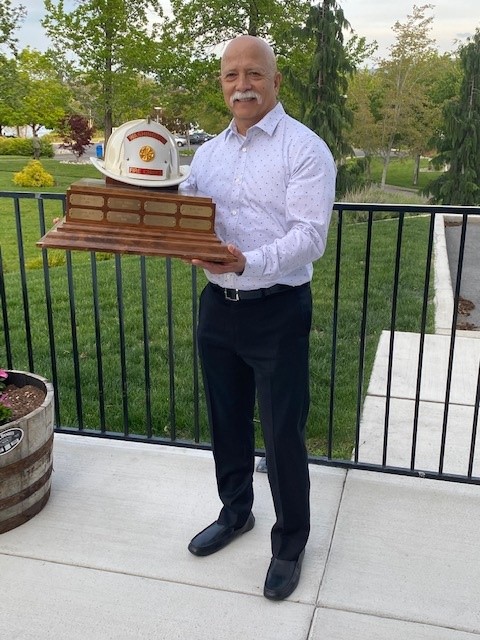 Each nominee must meet the following:
Chief Teran's accomplishments are too numerous to include, however, the following summarizes why he was the recipient of the Chief Dan Packer Fire Chief of the Year Award for 2022:

Chief Teran has exemplified all of the characteristics of Chief Packer in his far-reaching years of service to the greater Washington Fire Service. He has provided strong leadership, endurance, patience, and professional conduct meeting the highest ideals of a professional chief officer within our great State. During his time as a Washington fire chief, he has filled numerous local, regional, and state-level positions not directly required of him as Fire Chief. Chief Teran has served as the President of the Kitsap County Fire Chiefs Association, as a Washington Fire Chiefs Association (WFC) Board member, and is currently finishing his term as Vice President of the WFC. During his time with the WFC, he has served as a county liaison, section representative, and while VP participated on the financial and executive committees for the WFC leadership. During the past two years, he was also instrumental in the establishment of the Diversity, Equity, and Inclusion Committee (DEI) for the WFC. Chief Teran has also been involved with the Washington State Association of Fire marshals (WSAFM) and as a member of the State Building Code Council. In Kitsap County, Chief Teran is actively involved with the Kitsap County Fire Chiefs Association. He has served as the Kitsap County EMS Council's Chair, the Fire and Life Safety Section Chair, the Kitsap County Risk Management Group Chair, and the Administrative Section Chair. His leadership in Kitsap and at the state level has made him a role model and mentor for many new chief officers.

Congratulations to Chief Hank Teran. The Washington Fire Chiefs are proud of you!